Will Acker
To like or not to like: an anecdote about kids and online validation
Insight, digital, social
5 mins

Recently, Kids Industries conducted a trends study to discover what it’s like to be a kid these days. We spoke to a number of children, and their parents, to get an idea of what they are in to and what sort of things they struggle with and why.

We heard a lot of things that we expected to hear, such as that kids love Fortnite, YouTube is the viewing activity that has this age group’s eyeballs more than any other, and that kids still love Lego and Star Wars as much as they ever did. On the negative side, we also heard a lot about the  pressures that these children feel on a daily basis. Pressures such as: volume of school work, regular (life-determining) exams from a young age, emotions around parents working long hours, and the challenges that parents have of tearing their kids away from devices and addictive games.

But, we also heard some things that we didn’t expect to hear, which is the beauty of qualitative research. One of these in particular stood out for me...

Chris (not his real name), a 10 year old, immediately jumped out as the smartest and most engaging respondent of the study. He is an excellent communicator and both passionate and confident in sharing his ideas (of which he had many, as he is highly creative). Prior to the sessions, I receive a respondent grid and from this can glean basic information about what kind of family each child comes from. I could see that Chris was not from a privileged background and is unlikely to have anything more than the bare minimum opportunities available to him as he grows up and finds his way in the world.

Chris could not stop talking about Tynker and the projects that he is building on this platform. Tynker simplifies coding for young kids by using visual blocks for programming concepts, so that they can create their own games and animated stories. It also gives them an online platform to share their work with other users. Chris is prolific on Tynker and one of the core drivers for his engagement was clearly the ability to share his projects so people can view, like and share his work. He told us with pride that one of his stories received over 2000 likes!

While the thought that a 10 year old is receiving over 2000 likes on a social platform - and that this is affecting him emotionally - will send shivers down the spine of anyone who is aware of the current (and justified) concern around the impacts of tech on young children, I saw something hugely positive and even heartwarming in what in Chris was telling me. Tynker is providing him with immense opportunities for creative and intellectual development and I couldn’t see him engaging in the same way without the social aspect. The likes and views gave him a sense that his work was being valued by the world at large, a great self-esteem boost that he drives back into his next creative project, and also a yardstick by which he can measure success and work to improve his output. He started teasingly telling us that part 4 of his Halloween Vs. Christmas story would be coming out soon but, he cut himself off. He couldn’t tell us more about it as he is keeping all that secret until the launch date on Christmas day. If at age 10 he is  considering his content release strategy, it makes me feel very optimistic about what he will be capable of when he grows up!

To me, this represents a democratisation of opportunity. A child that isn’t born to an affluent family, does not attend a school with the best teaching, and isn’t privy to after school clubs where he can develop his co-curricular interests is, by virtue of Tynker, well on his way to understanding coding, developing a portfolio and understanding how to have the greatest impact on your audience. While we are well aware that the massive role that technology and social media is playing in children’s lives will have long reaching impact - and many of these may be negative - I saw in Chris that some of these will be positive also.

The question of likes and views and the impact that they have on our wellbeing is an important question for both adult and child social media users alike. Any developer making digital tools for children knows design decisions in this area need to be made very carefully. Tynker users have an avatar that shows no user PII and allows number of views, likes, and remixes (of a project) to be seen, but has no negative reaction or comments function. Their approach prevents anti-social behaviour and, at least in Chris’ case, uses the undeniable power of online social validation to a highly positive end.

Apex, Anthem and the Future of Narrative in Video Games
Matteo Spezialetti 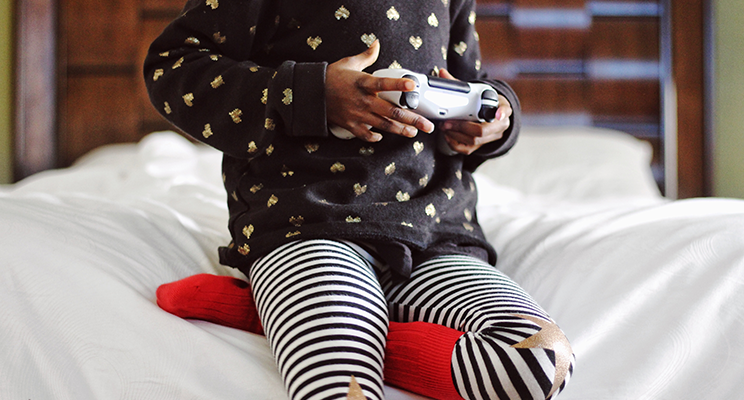 Why do teens like watching other people play games?
Rachel Foster